The 1st HUNGARIAN HORSE BREEDING DAYS were arraged by the Federation of Hungarian Horse Breeders from October 6 to 8 located in the Mezőhegyes State Stud.

The main goal of the event was to draw attention to the values of the traditional Hungarian breeds. Another target of the initiative was to have the breeding soundness exam for Hungarian bred horses on a permanently high level, organised around a central event. More than 200 Hungarian horses attended to this event. Beyond the exams for mares – coach-driving, show-jumping and dressage competitions were organised wiht high prizes. The following Hungarian breeds presented: nóniusz, lipicai, shagya-arab, furioso- north star, kisbéri félvér and gidrán.

The STV II. breeding soundness exam was passed by 3 young stallions in the furioso – north star breed: two four year old stallion from the Kéktói Ménes and one 7 year old from the Borbási Ménes.

On the second day horses had to complete under the rider tasks: through the furioso – north star STV II. exam a dressage test and a 100 cm dressage field. Following this there was a pace lengths measurement in pace and trotting strides.

Based on the review points the first place was taken by 5761 Furioso XLIII-144 Flúgos, the 4 year old „D” line bay furioso –north star stallion, owned by the Kéktói Ménes. His sire was the Furioso XLIII foundation stallion „Futár”, his dam was Viesbaden Furioso-11 „Laguna” from the Aranyági Linka II mares family of Hódmezővásárhely and his dam line grand sire was Viesbaden ox, arab full-blood. Flúgos passed the breeding soundness exam I. in November of 2015 and started to compete in the show-jumping branch this year. His jumping manner is outstanding. He gained the highest style score in the debutant horse category in Csongrád County. He is such an easy to ride and intelligent stallion.

The second place was taken by the 7 year old, dark bay stud 5538 Furioso XXXVI-94 „Délceg”, bred by ifj. Sándor Horváth from Kecskemét. His sire was 4331 „Gyanu” I (Furioso XXXVI tm.), his dam was Furioso-43 „Dicső”, Mezőkeresztes-13 Meteorit (Furioso XXV tm.). His owner is Dávid Klucsai and the rider was Szilveszter Szelei at the stallion exam.

The third place of the exam was won by 5758 Furioso XLVII-29 „Tréfa”, a 4 year old, „D” line furioso – north star stud from the Kéktó Ménes of Hódmezővásárhely. His sire was Furioso XLII foundation stud „Iszony”, his dam was Hand Furioso-87 „Tangó” from Kéktó Tigris mares family in Hódmezővásárhely, the dam line grand sire was „Hand” a half-bred with high rate of thoroughbred. His grey colour – which is rare in this breed – was inherited from his grand sire, Furioso XL tm. „Fukar” which got into the Hungarian breeding from Motesice and passed exams in 5 branches. „Tréfa” passed the breeding soundness exam I. in November of 2015 and started to compete in the show-jumping and dressage branches this year. His rider was Csilla Juhász on the exam.

The Federation of Hungarian Horse Breeders organised 3 events for the Hungarian horses in show jumping, in which many furioso-north star competed.

The winner of the event is Dóra Kossuth who is the contestant of SZI LSK in Békéscsaba with her horse Furioso XXXIV-127 „Ricsi”. The breeder of the horse is Éva Sári from Szeged.

The fourth place of this category was taken by Anna Heller Szabó with Furioso-67 „Tini”, mare of the Kéktó Ménes. „Tini’s” sire is 4687 Furioso XIII-81, „Hórus Formás”, dam line grand sire is „Ishamo xx” and her dam is Ishamo North Star-9, „Tina” from the „Aranyági Tündér” mares family in Hódmezővásárhely.

Another competitor was Kata Fejes with two horses of our stud: Furioso-84 „Iszony” Furioso XLVII foundation stud and Hand Furioso-87 „Tangó”. „Iszony’s” sire is Furioso XL tm. „Fukar”, dam is „Ilka” from the mares family of Kéktói Irma in Hódmezővásárhely. „Tangó’s” sire is „Hand” a half-bred with high rate of thoroughbred, dam is Furioso XII-34 „Tigris” the foundation mare of the Kéktó Tigris mares family in Hódmezővásárhely.

The third placed rider of the senior category is Anna Sebők, competitor of the Kéktó Ménes with furioso „Mázli”. The horse is 11 year old gelding, breeder is Éva Sári.

Another two furioso-north star performed in the contest. Szilárd Czurkó rode The Bart Furioso I-49 „Lipót” the 4 year old gelding which was breeded by Béla Egyed in Hódmezővásárhely. Furioso XXIX-8 „Bátor” was ridden by Zoltán Czakó. „Bátor” is a certified colt from the mares family of Aranyági Babona in Hódmezővásárhely, its owner is Gábor Torma from Mélykút, its breeder is the Hód-Mezőgazda Rt.

Castor North Star-46 „Kabala” finished on the third place with the rider Zoltán Teleki. The 7 year old full horse’s sire is „Castor”, the dam is North-Star-158 „Vihar”, the breeder is the Essen Kft. in Karcag.

The other furioso participant horse of the competition is owned by the Kéktói Ménes Furioso-106 „Jázmin” and her rider, Csaba Székely took the 7 th place at the event. „Jázmin” is a 10 year old mare, her sire is Furioso XL „Fukar”, dam line grand sire is Masetta xx, dam is Masetta North Star-41 „Julcsa” from the Kéktói Jolán mares family, the breeder is István Kucsora.

Hungarian horses could try their abilities with each other. Two events were announced in this branch in which the following furios-north star horses competed:

The third place of the category was taken by Pixi Baby furioso mare with her breeder and owner Zsuzsa Babinszky from Szentes. The 6 th place winner is Tünde Farkas and Furioso-97 „Színfolt”. „Színfolt” is a 11 year old mare, her sire is Furioso-144, dam line grand sire is Furioso VI-52 „Fontos” (XIII tm.).

In this category the winner was Katalin Fejes with the 9 year old full horse of Kéktói Ménes, Furioso-123 „Lényeg”. The sire of „Lényeg” is Furioso XLIII tm. „Futár”, dam line grand sire is Viesbaden ox pure-bred arab, the dam is Visbaden Furioso-11 „Laguna” from the mares family Aranyági Linka II in Hódmezővásárhely.

The sixth became Bendegúz Knipf, rider of the Baktói Lovas Klub with his horse Furioso-167 „Tabu”. The sire of „Tabu” was Furioso XL tm. „Fukar” and the dam was Furioso XII-34 „Tigris” from the mares familiy Kéktói Tigris, the breeder is István Kucsora.

Annak Sebők finished on the 7 th place with her above mentioned gelding „Mázli”.

„Morcos” completed the program with his rider Réka Orbán. The breeder of the bay gelding is Zsuzsa Babinszky from Szentes.

Furioso-58 „Emlék” participated in this event with her rider Ádám Garzó. The breeder of the 4 year old chestnut filly is János Perényi from Hódmezővásárhely.

Hand Furioso-87 „Tangó” – horse of the Kéktói Ménes – competed in this event with Alexandra Nagy.

Furioso XL-90 „Liptonka” was ridden by Anna Heller Szabó. The 8 year old grey mare comes from the Kéktói Ménes. Her sire is Furioso XL tm. „Fukar”, the dam is Furioso XXXIV-73 „Lipton” from the mares family of Aranyági Linka II in Hódmezővásárhely.

Juhász Csilla brought two 4 year old colt to the competition. They were mentioned above at the exams for stallions: Furioso XLIII-144 „Flúgos” and Furioso XLVIII-29 „Tréfa”.

The other dressage event was an „S level” program in which furioso kind horses also competed.

Furioso-83 „Briós” and Barbara Franyó finished on the third place. Briós is a tall half-bred furioso from the mares family of Borbála from Kiskunság, the breeder is Andor Salga from Gyöngyös.

Tünde Farkas and Furioso-97 „Színfolt” finished on the 7th place.

ON THE 1st HUNGARIAN HORSE BREEDING DAYS a two round combined driving with two horses obstacle cone driving competition was organised for the drivers competing with Hungarian horses.

Two furioso-north star coaches competed in this event. The owner and breeder for both is Gábor Domokos from Csongrád.

The other coach of Gábor Domokos was driven in this event by the coachman, József Sági and the coach assistant Péter Goda. Half-brother and half-sister horses were driven in the coach:

Thanks are due to the breeders, owners, trainers and helpers who have a large role to play in promoting this breed again. We hope that next year similarly many furioso can participate in this high standard event. 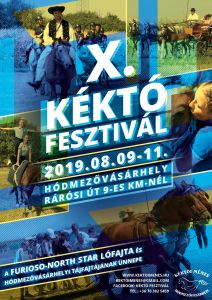